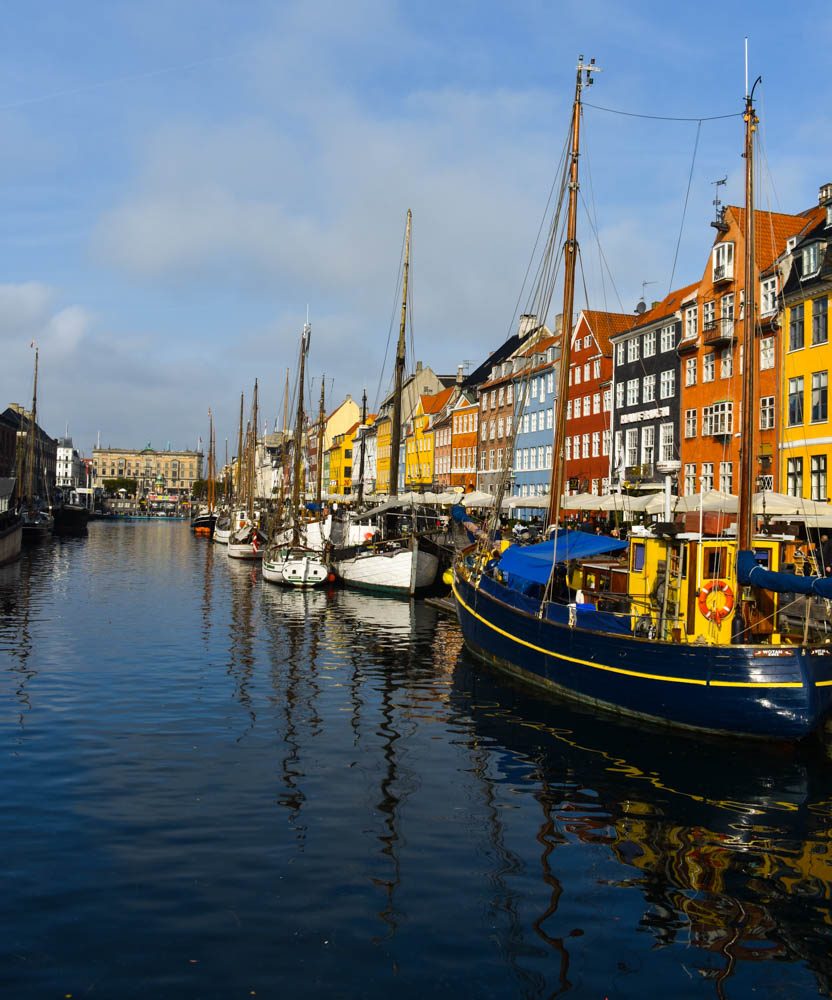 I turned 60 this year and as always, it’s not unusual for one or other of your peers to do likewise.  So, you get your similar minded pal who wants to celebrate the WHOLE year too and you make the decision over a glass of water (not) to go somewhere – see somewhere you haven’t seen.  I, however, was in the unfortunate position of having a pal who has seen most of the cities of Europe and I think it’s really not worth while on a two night break to go beyond a two and half hour flight.  Many glasses later, we decided on Copenhagen.

Once I set my mind to do anything, I am “up and at ’em” and I had flights booked before we had taken the tablets to sort out the fluid intake.  For the time of year (October), Ryanair came out trumps with €35.00 return per person.  Next stop, Booking.com and our hotel was booked.  I just like this website, as it does give you the option to pay when you arrive but we chose to pay beforehand. I had been talking to a friend and luckily the first one that I had chosen, was one that she had stayed in and she said not only was it very close to the “Ladies of the Night” (which really doesn’t bother me), but that the rooms were not very clean.  So, we ended up staying in the raddisson collection.  This is actually the city’s tallest building and has 20 floors.  It was designed by architect Arne Jacobson in 1960.  Rooms are spacious with espresso machine (Yesssss!!!!)  and the usual fridge of wine and prosecco plus we were a 5 minute walk from the Central Station, which has trains running every 15 minutes to and from the airport.  Best get a 48 hour ticket which allows you on all modes of transport – sort of – excluding the On/Off Tour buses. The Metro is also very quick and convenient, depending on where you stay.  Breakfast in the hotel was divine.  Cost of stay worked out at €112.50pp excluding breakfast for two nights.  Breakfast was €25.00 extra.  At the time of writing this, 100 DK was equal to €13.40. Reception were so helpful and from the get go, people were very friendly and helpful.  Someone even got off his bike to come over to help two old ditherers locate themselves.

We arrived at our hotel at about 5.00pm so really there was not a lot we could do except potter and have a glass of wine. Or two.  We ended up quite close to our hotel and sat outside under heating at a bar called  oscarbarcafe.  We couldn’t help but notice that the men were particularly charming and of course we thought we hadn’t lost “it”, but it turns out it was a Gay and Lesbian Venue.  Sure what matter.  It was on a gorgeous autumn, tree lined street.  We asked two people with their divine dog to suggest somewhere we should eat just for that evening and lo and behold there was a really cool Brasserie on exactly the same street.  Highly recommend.  Food very good and average pricing, as in same as here.  Nothing is really cheap in Copenhagen, so bear that in mind.

Next morning, a bright and shiny day full of promise, off we go On the On/Off Red bus.  Take note of all the different routes one can travel on these redbuses.  We chose one which took us first to the wonderful Nyhavn (see above image).  visit copenhagen

It’s the prettiest town and I tried out my camera without boring Jane by taking too much time adjusting aperture, ISO, shutter speed.  Couldn’t resist the lovers’ locks.  Since I took up my camera course, I am always on the look out for a nice shot or a different view.  My knees don’t thank me.   We meandered along the quays.  It’s really busy, but just great for people spotting and just sitting at a side walk cafe and basking in the October sun.  On the bus again to take us to the Little Mermaid.  These buses have the usual head phones to keep you posted on what’s around.  We had been warned that the Little Mermaid was really small, so that she exceeded our expectations and was a decent size mermaid, as mermaids go!  Next stop for us the absolutely beautiful Rosenborg Castle.

This castle has full security because it houses the magnificent Crown Jewels in the Treasury.  You buy an entrance ticket and leave large bags in a locker.  We chose our mobile phones to talk us through the various rooms, but you know, I’d have preferred a book, as sometimes you get too much of your phones.  However, you are allowed take photos in all rooms.  Everything seems to be covered in gilt and not your common or garden cheap stuff.  This is the real McCoy.  Do visit the Treasury, because it is gasp worthy.  The Botanic Gardens are sublime.  Off we went on our bus to the absolutely awfully disappointing Hans Christian Andersen Museum.  DO NOT GO.  It mainly contains a Ripley Believe it or Not exhibition and the Hans Christian Andersen part, although sweet, is kind of tacky.  I did learn that he really based The Ugly Duckling on himself as both he and others considered him ugly.  How very very sad.  I am so glad that he is celebrated in Copenhagen for the wonderful writer that he was.  I grew up on his stories and all had some little kind message to convey.

Unfortunately for us, the Tivoli Gardens were closed for the winter.  It’s a fabulous place; a fairy tale ambience, exotic buildings and upmarket entertainment and restaurants. I believe Walt Disney took his inspiration from here.  Tivoli does open for six weeks between mid-November and the end of December for a winter wonderland and “elf driven, Father Christmas – strewn, illuminated Christmas extravaganza”. (Eye Witness Travel).  Lit pumpkins were already lining the main thoroughfare for similar Halloween celebrations which take place mid October.  We had booked a restaurant mentioned in our guide called Nimb Brasserie.  Food and service to die for and a super view of the Tivoli.  We then went to Trio for cocktails.  As you do.  Great place and cocktails were about €15.00.  A bit pricey but………….

I was so very sad to be leaving Copenhagen early enough the next day.  So much more to see including the great shopping area called Stroget, The Latin Quarter, Amalienborg Palace and so much more. A super clean, eco friendly and people friendly place. Fewer cars on the road as everyone uses their bikes.  Way to go, Denmark 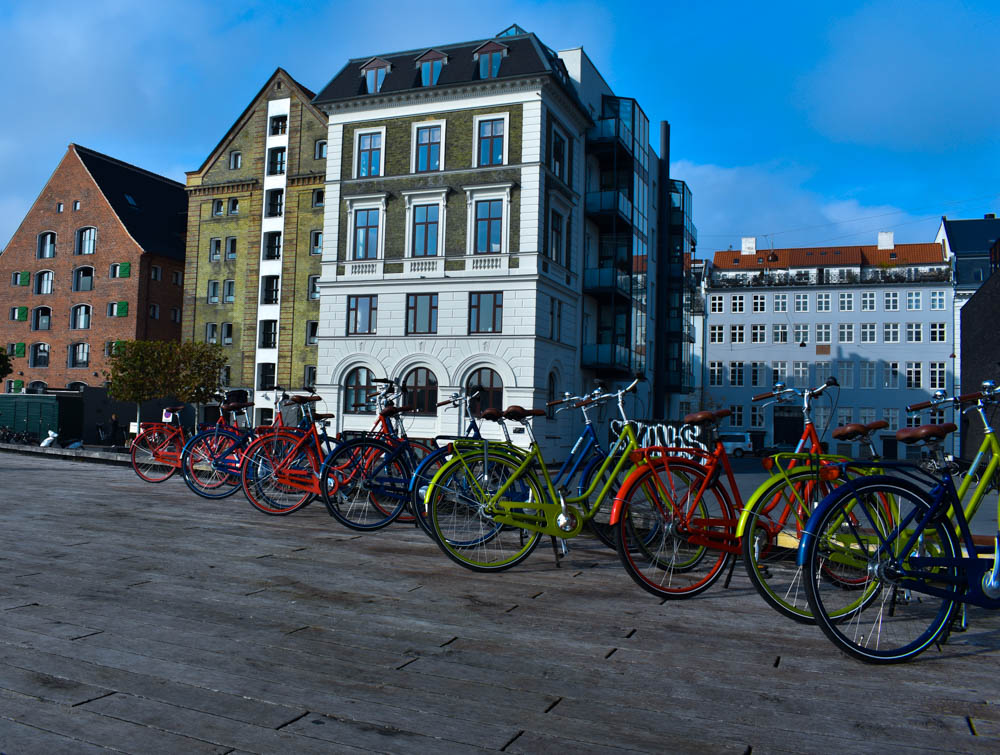 Woman on a mission to try and squeeze every last drop out of life. View all posts by slippersintherain

1 thought on “A short and very sweet trip to Copenhagen”

This site uses Akismet to reduce spam. Learn how your comment data is processed.

Woman on a mission to try and squeeze every last drop out of life.

Recent Posts: Slippers in the Rain

Trip to Lisbon in May

A few days in Cornwall